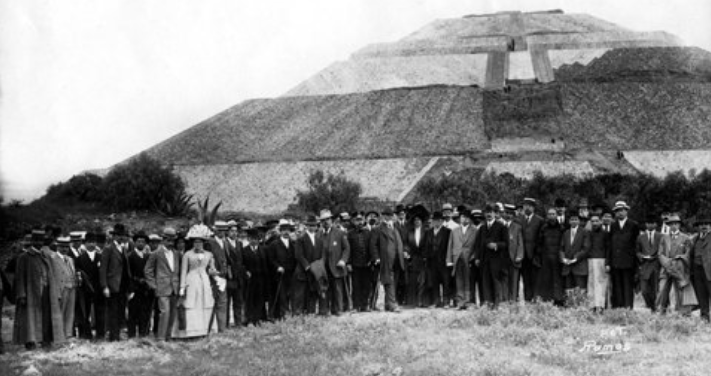 Today, it is very easy to photograph and document the world around us. For example, people visiting Teotihuacan can take countless photos and share them on social media immediately; however, in the past, it was much harder to capture and reproduce images. The lithographs, paintings, and photographs from the end of the 19th century to the beginning of the 20th century demonstrate the many changes that the archaeological zone of Teotihuacan has undergone. Most of the images here can be found at INAH’s Media Library.

Developed in the late 18th century, lithography is a printing method which has been used to preserve images that explorers saw. In lithography, an image is engraved on a surface (usually limestone), ink is applied, and then the stone is pressed into paper (Tate 2021). This process allowed for a wider distribution of images of sites such as the Teotihuacan pyramids and its scenery during the 19th century.

José María Velasco (1840-1912) was a Mexican painter who accompanied Gumesindo Mendoza in his expeditions to Teotihuacan and portrayed the city’s landscape in his paintings (Google Arts and Culture s.f.). Teotihuacan was abandoned around AD 550, so after some 1,300 years had passed, there was certainly a lot more vegetation covering the monuments for Velasco to capture.

Here are some bonus photographs of the site (way back in the day) for you to enjoy:

The first archaeological work began on site in the early 20th century by Leopoldo Batres to commemorate the centennial of the Mexican War of Independence. Batres was commissioned by President Porfirio Díaz to explore and restore some of Teotihuacan’s monuments. This project included reconstructing the Sun Pyramid, building railway lines, and discovering murals in the Temple of Agriculture (Batres 1993 [1919]).

Seeing the clothes that people wore back then is a testament to how much time has passed. Indeed, fashion has changed since.

The excavation, restoration, and reconstruction of Teotihuacan continued through the 20th century. The rest of the photographs here likely refer to:

These images document how much change Teotihuacan had undergone in the first half of the 20th century. Although several centuries have passed since its occupation during the Classic period, this site continues to be relevant in the construction of our history. To know more about the history of this pre-Hispanic city, you can check the PPCC’s study area section.