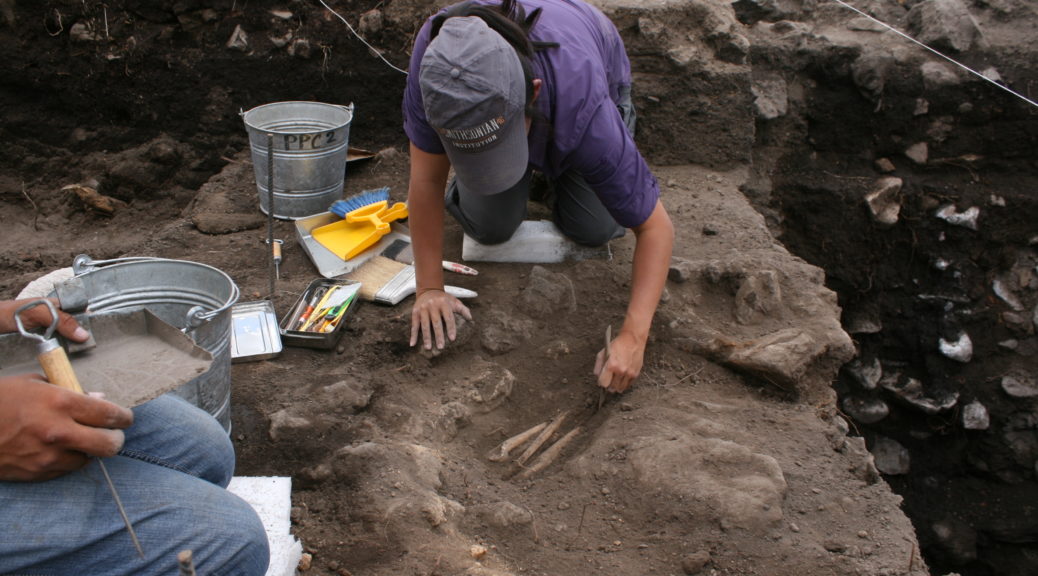 Excavation, recovery, and recording of materials

Archaeologists use the information recovered by survey and geophysical prospection to select the areas they intend to excavate. Excavations are an essential component for an archaeologist’s profession, allowing us a window into past human activities and their changes from one period to the next.

During the project’s first season, four areas (or fronts) were excavated: Front A, Front B, Front C, and Front D. These fronts are located in two of Millon’s quadrants (1973): a) N4W1, corresponding to the Plaza of the Columns – Avenue of the Dead; and b) N4E1, Plaza North of the Sun Pyramid – Avenue of the Dead. In the second season (2016) the new area of “Front E” was opened, and another, Front F, will be opened during the third season (2017).

A site can be excavated only once as archaeology is often described as a destructive science. For this reason, archaeologists are committed to carefully record every object and their context to preserve as much information as possible.

After choosing the site to excavate, how do archaeologists plan an excavation?

Before beginning the excavation, archaeologists mark where the excavations will take place. For this project, quadrants measuring 3 x 3 meters were assigned as the standard, although sometimes only a portion of the quadrant was excavated. Each excavated quadrant has a unique alphanumeric code. For example, “Quadrant A1” and any resulting material recovered are associated with that code to record its origin. In the picture on the right, the perimeter of a quadrant is delineated with string.

Archaeologists must dig carefully through the layers of sediment; it is very important to analyze the stratigraphy to understand changes over time.

Stratigraphy is the study of the relationships between layers or strata of soils and sediments from a site deposited over time. According to the law of superposition, layers at the bottom are older than the ones on top, thus the deeper layers were deposited prior to the more superficial layers.

Let’s review an example: Imagine you have a layered cake like the one depicted in the image below. The slice shows us that this cake is composed of multiple layers with each one having its own distinct characteristics such as flavor and thickness.

Which layer is the oldest? Based on the law of superposition, the layer that is at the bottom would represent the oldest one.

Each layer will be assigned a Roman numeral in ascending order, beginning with “Layer I” and so on. Now, describing the layers of this cake would result in something like this:

A similar recording system is applied in archaeology: the cake slice represents the site being excavated with Layer I, comprised of earth, plants, and in some cases fragments of pottery and obsidian, as the visible surface prior to excavation. The stratigraphic information is gathered only through a slice of cake, which parallels the excavated portion of the site. This analogy highlights that we are able to get information from only a fraction of the study area. In addition, the different layers of the cake observed in the slice correspond to the stratigraphic profile of an excavation. The layers we observe during the excavations tend to differ. For example, some are thicker and others thinner, continuous or disturbed, horizontal or with some degree of inclination. Such stratigraphic information help tell us how each layer was deposited and, as a result, why we must carefully document all the characteristics of each layer, such as its depth and inclination.

But in archaeology, how can we recognize a layer?

A layer is mainly composed of sediment and can be distinguished by various characteristics such as soil texture (sandy, rocky, or silty), if it is loose or compact, grain size, and color. If sediment with similar characteristics is found across a contiguous, often horizontal area, it is designated as a “layer,” beginning with the superficial Layer I. We continue digging until we notice a change in color or texture of the soil. This change likely represents a different layer, which would be named Layer II, and so on.

In archaeology these layers can also be recognized by the presence and abundance of cultural materials such as artifacts, ecofacts, structures, and features. The following drawing is an example of an archaeological stratigraphic profile recorded during the first season of this project:

The image exemplifies how not all layers found in archaeological contexts are homogeneous or continuous. Layer I, for example, corresponds to the natural deposition of earth accumulated over time, as well as Layers II and III. And all of them are relatively homogeneous.

In addition, the above plan defines architectural structures and other features as layers. For example, Layer IX is a floor, and Layer XI is a talud wall (slopping wall architectural element). Layer XII is a rock-based layer used as fill for constructing the talud wall. You can also examine how the deepest layer corresponds to the natural tepetate (or bedrock), a sediment often quarried by the Teotihuacanos to use for laying the foundations of buildings.

In this manner, archaeologists take detailed drawings and notes on everything they find in each stratigraphic layer. When they find architectural structures or other features such as caches, offerings, or artifacts, they draw them or take photos of them in situ in the original context.