What is beneath the surface?

It is important to acknowledge here that archaeology is a destructive science; it is an unfortunate reality that we must face when uncovering the past. Therefore, it is of utmost importance to always be cautious when extracting the maximum amount of information with the least amount of intrusive methods.

After constructing a map of all visible elements in the area and before starting the excavations, it is preferable to conduct remote sensing which allows us to get an idea of what lies beneath the surface and captures features that are difficult to detect with the naked eye. This requires doing a geophysical survey, which is used to define, with better accuracy, where the best areas to excavate would be without any physical damage. All prospecting analyses for the project were conducted by the research team of the Laboratory of Archaeological Survey (IIA) of the Institute of Anthropological Research at the National Autonomous University of Mexico (UNAM). If you want to learn more about them, read their bios here.

What is geophysical survey? And what is it for?

The term geophysical survey (also called geophysical prospection) refers to an exploration of the terrain (topography) and its subsoil characteristics to determine the location of any existing archaeological features. In this case, this survey technique is used to guide the direction of future excavations because it allows us to identify subsoil structures or architectural elements that may have previously been overlooked prior to excavation. Moreover, this same technique can distinguish among the various types of activity areas by detecting different architectural elements, large cavities, and even hypothesize the depth of bedrock.

At the Plaza of the Columns Complex, three geophysical methods were carried out: (a) magnetic survey, (b) geoelectrical survey, and (c) ground-penetrating radar. Using at least two geophysical techniques helps us to verify information and thus reach more accurate results.

How can we see beneath the ground? 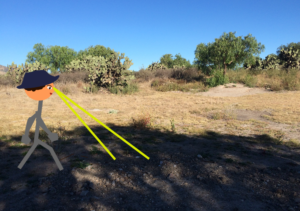 Although we do not hold super powers as convenient as X-ray vision, techniques such as remote sensing can indicate the presence of buried structures prior to excavation. Remote sensing works by detecting differences in the composition of building materials among the buried structures that are distinct from that of the backfill dirt or other geological properties to map out the distribution of potential archaeological features.

(a) Magnetic survey: Understanding the magnetic properties of materials

Some materials have small amounts of minerals that produce detectable magnetic fields. Recording the strengths of these magnetic fields emitted from the ground is particularly conducive to detecting burned areas like ovens and stoves. Because Central Mexican architecture often utilized locally available volcanic stones that carry trace metals, magnetic surveying has been a particularly helpful methodology for remote sensing. In this manner, the presence of wall alignments, moats, and trenches are sometimes recognized even before we begin excavation.

A gradiometer (a type of magnetometer) is a device that captures small variations in the Earth’s magnetic field; in our case, it is used to detect buried archaeological structures. The magnetometer can detect small amounts of magnetic minerals such as magnetite or ilmenite in some construction materials. Depending on the mineral composition of the raw material, the structures will exhibit strong or weak magnetic field. Variation in the magnetic field strength of different materials is caused by the induction of the Earth’s magnetic field and the remnant or thermoremnant action produced after a material is heated above the Curie temperature, or in other words, the temperature at which a ferromagnetic element loses its magnetism. Curie temperature varies from element to element.

This technique is particularly effective to detect burned areas like ovens and hearths, and it can be used to identify walls, depressions, and trenches.

One of the main advantages of the magnetic technique is that it can cover large areas in a short period. After data acquisition, basic data processing is expedient, and it is possible to get immediate results to guide the next stages of prospection and excavation.

(b) Geoelectrical survey or electrical resistivity: Sending electric shocks into the ground

Geoelectrical survey detects levels of electrical resistance by shooting an electric current into the ground. Through this technique, we can get clues as to what lies beneath the surface. For example, features such as stone walls impede the current while looser soils from dirt fill or other excavated areas facilitate the current.

This particular technique is very useful when confirming results concerning the magnetic gradient. Like the name implies, electrical currents released towards the ground and the resistivity of these currents are measured. Usually the presence of subsurface structures like foundations and rock walls causes high resistivity readings, whereas areas with wet sediments in trenches result in low resistivity.

By recording areas with high and low resistivity, it is possible to identify the arrangement and size of filled ditches, walls, or other structures.

In this project, the electrode arrangement “pole-pole” or “twin-probe” was used. This technique is widely utilized by archaeologists due to its portability and spatial resolution, making the results easier to interpret than other methods. It consists of four electrodes that are buried near the surface of the ground: two electrodes are used as movable electrodes, and two as fixed electrodes.

Ground-penetrating radar (GPR) techniques emit an electromagnetic wave from an antenna towards the ground. These waves, reflected as echoes, and their characteristics help create a two-dimensional and even a three-dimensional image of subsoil anomalies, which can help recognize the shape and depth of structures, cavities, and even bedrock.

GPR is one of the newer and most powerful techniques for recording what lies below the surface in a rapid and non-destructive way. This tool allows for more strategic excavations, thus making it an invaluable tool for archaeological research.

There are many factors that must be considered when utilizing the GPR technique, particularly the depth and composition of the materials in the subsoil. Usually GPR is more efficient when there is a good and clear dielectric contrast between the object of interest and its surroundings; detecting buildings made of solid rock is much more discernible than investigating structures made of earth.

GPR allows us to not only detect the location of an anomaly, but it also gives us an estimation as to how deep said structure is buried.

Each remote sensing techniques carries its advantages and disadvantages; however, it is only when we are able to combine two or more of these techniques that we can develop a well-developed and well-informed excavation plan.