Yuta received his education from the International Culture Studies from Aichi Prefectural University in Japan. His most recent research, which focuses on the material culture and symbolic use of precious stones such as obsidian, amber, and pearl, resulted in his master’s thesis entitled “Medical and Medicinal Obsidian Use in Mesoamerica: Materialization of Divine Curative Power.”

Yuta has collaborated on multiple archaeological projects in both obsidian analysis and topography, including “La Ventilla” in Teotihuacan as well as in Cholula and Templo Mayor in Mexico and Copan in Honduras. He was in charge of topography for the Plaza of the Columns Complex Project in 2015 and 2016.

Amparo is an archaeologist who earned her bachelor´s degree in Anthropology with a minor in Archaeology in 2008 and master´s degree in Anthropological Studies of Mexico in 2012 from the University of the Americas Puebla (UDLAP) in Cholula, Mexico. Her research interests include the rise of urbanism and development of early state societies on the Centra 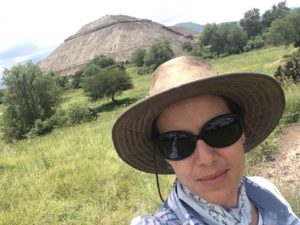 l Mexican Highlands. She has participated in research projects in Central Mexico, the Maya Area, and the Mesoamerican western area. She has specialized in the generation and development of digital maps of ancient architecture for archaeological research projects like the “Proyecto Tetimpa” (2003-2007 and 2010-2012) at the Cholula Great Pyramid, the “Proyecto de Interacción Política de Yucatán” (2008) on the Maya Lowlands, the “Proyecto Templo Mayor“ (2017, 2019), and recently the “Proyecto Complejo Plaza de las Columnas” in Teotihuacan (2017-2019).