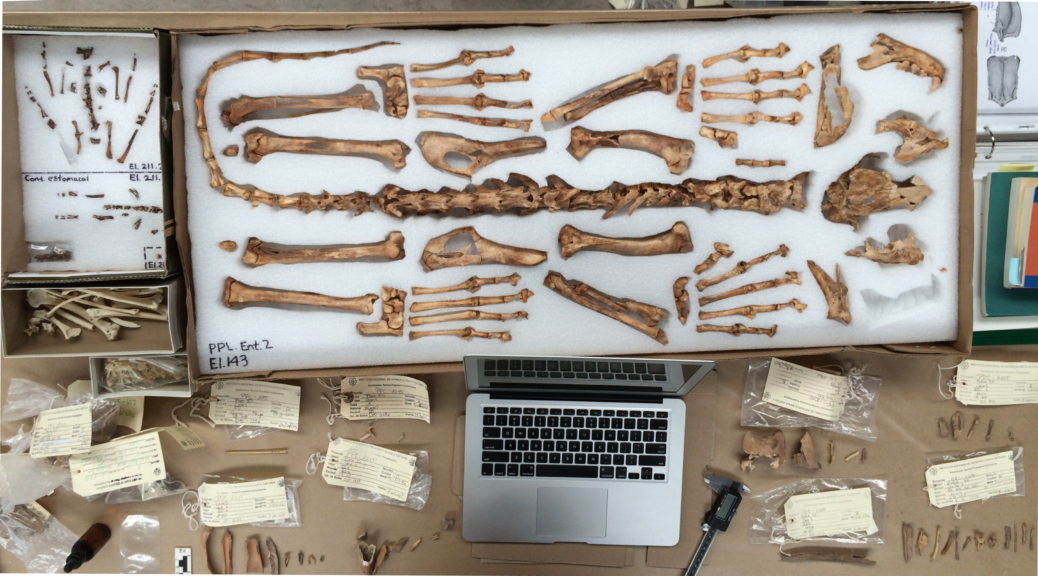 Bones… what can they tell us?

Another revealing study is the analysis of bone remains. Each year our specialists make significant progress in the field of studying bones recovered during excavation.

The main objectives are to identify what species are there and how many specimens or individuals are represented in the assemblage. Any discernible health conditions and evidence of cultural activities or actions on the bone (such as if they were worked, boiled, burned, fragmented, etc.) are also recorded.

The bulk of these bones were recovered out in the field, but a small, but no less important, part is recovered during the analysis of soil samples. These bones in general consist of human and animal individuals.

Among the animal bones, we have identified deer, turtle, birds like quail and turkey, rodents, rabbits, dogs, and pumas. In some instances, the bone is too fragmented to assign to species. Instead, these are classified into size categories of small-, medium-, or large-sized mammals. Additionally, many of these bones showed evidence of modification, that is, they have been worked to make tools (needles, spindles, wedges, scrapers, and gravers), painted with pigment, butchered with cut marks, or showed signs of having been cooked (burned or boiled).

This shows us the many uses of animals in the daily life of Teotihuacanos. For example, larger species like deer were used as a source of meat but also for their antlers and fur (pelts). Unsurprisingly, we have found multiple butchery and cut marks on various but specific parts of the animal’s body. Another interesting example is the burnt bones of rabbits and small birds like quail, which were likely cooked to be eaten.

As for the analysis of human bones, the main objectives are very similar. First, the specialist identifies the specific type of bone: skull, arms, trunk, legs, etc. Then he/she estimates the age of the individual, followed by recording any visible pathologies (identifiable diseases affecting bone) and verifying if there is any evidence of natural or cultural modifications. These include marks resulting from making tools as well as those produced by cutting, burning, boiling, and even intentional breaking

In general, the main part of the human bone assemblage is made up of fragmented pieces, but we know that they belonged to men and women of all ages, from infants to adults. The collection recovered from Front A that have been analyzed thus far tell us that the majority of the bones were fragmented, burned, and possibly dismembered at or close to the time of the individual’s death. This paints an intriguing picture of that context, as this may be the result of an ancient violence event.

And here you will find some interesting results of other bones analysis:

The Elements of a Paleodiet: How Isotope Analysis Help Archaeologists in the Lab