Below is a brief biography of the archaeologists who joined the project team in 2016. In parentheses we indicated the seasons in which they participated. 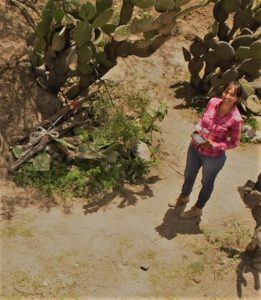 Claudia received a degree in Archaeology from the Autonomous University of San Luis Potosí, Mexico. Her dissertation, entitled “Infancy in Archaeology: A Study of Bone Remains from El Ocote and La Montesita, Aguascalientes,” centered upon funerary contexts concerning infant death in societies from North-central Mexico.

Claudia has professional experience working in different regions of Mexico. In 2011 and 2012 she participated in the “Polígono de Protección de Monte Albán” in Oaxaca as well as collaborated in the archaeological investigations in Santiago (2011) and in La Montesita (2012). In 2014 she took part in the analysis of archaeological materials from El Ocote. And in 2016 she assisted the “Proyecto de Sistema Único de Registro Público de Monumentos y Zonas Arqueológicas e Históricas” with recording archaeological artifacts in the State of Sinaloa, Mexico.

Her professional interests include funerary contexts, gender and childhood studies, and social behavior at the northern Mesoamerican border and in general northern Mexican societies. In order to broaden her perspectives about the development of northern societies which are linked with the fall of Teotihuacan, Claudia joined the research team of the “Proyecto Complejo Plaza de las Columnas” in 2017. 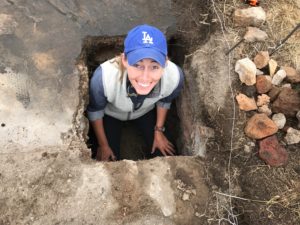 Lauryn is a recent graduate of George Mason University, U.S.A., where she earned her Master’s degree in Anthropology. With her research interests encompassing hunter-gatherer complexity, personhood, social identity, as well as mortuary rituals, her master’s thesis explored archaeological mortuary practices and social age in a sample of hunter-gatherers from Point Hope, Alaska, using dental estimates of age-at-death. Age estimations based on tooth formation were accomplished by taking radiographs of subadult mandibles associated with the Ipiutak (700-1200 BP) and Tigara (AD 1300-1700) cultural groups. In addition, Lauryn incorporated mortuary data regarding grave goods, body positioning, and spatial orientation from the original site report to observe patterns that indicate maturation occurred as a cultural event. Previously, she has collected data from the American Museum of Natural History in New York as well as the Smithsonian Conservation Institute in Maryland. Lauryn is excited to work as an archaeologist for the Project Plaza of the Columns Complex and hopes to lend her expertise in the field of physical anthropology in order to help reconstruct lived experiences at Teotihuacan.