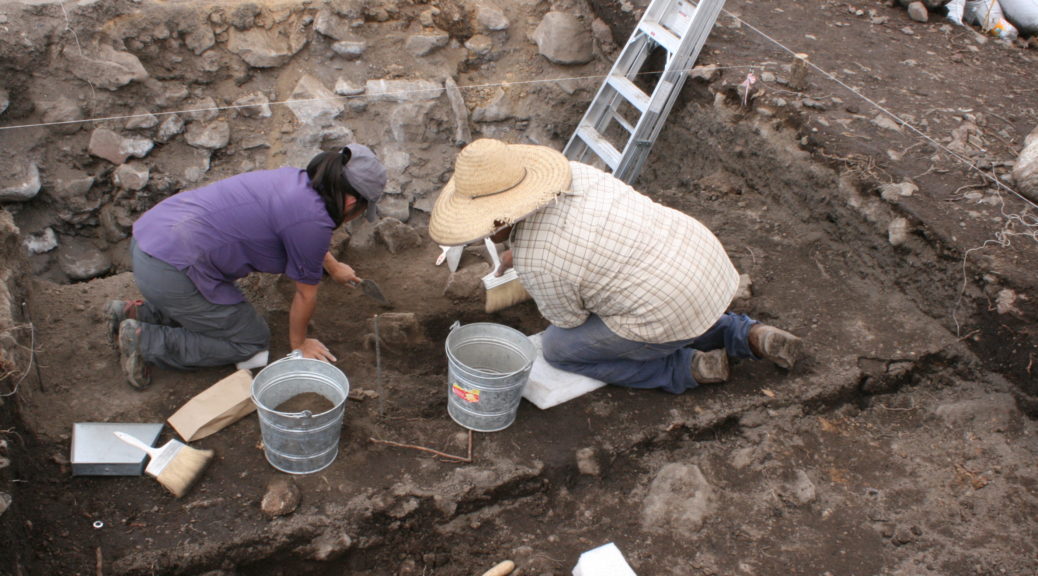 Archaeologists study the material remains of any human activity in the past. Evidence of past human activity can take on many forms, including osteological or skeletal remains of humans, remnants of ancient buildings (e.g., houses, rooms, pyramids, cities, walls), ceramics (such as fragments of jars, cups, dishes, incense burners), and organic remains like animal bones, plant remains (e.g., seeds and pollen), and shells.

Archaeology is currently an interdisciplinary field, meaning it integrates specialists from many different subject areas to gather more information from the materials recovered. Using their pooled data, archaeologists can piece together fragments of history to generate hypotheses about how the ancient civilization of Teotihuacan came to be.

Fortunately, at the archaeological site of Teotihuacan, many structures remained buried after use and abandonment, which has helped preserve material traces of past activities despite its antiquity of almost two thousand years. For this reason, we are interested in excavating these areas to explore and reveal who built and lived in this ancient city.

Why is it important to study the Teotihuacan ruins?

Teotihuacan, as a UNESCO world heritage site and as one of the largest urban metropolis in the New World, plays a very vital contribution to Mexican national identity and heritage, as well as to global interest. As a premier model of state formation and urbanism, over two centuries of investigation at the site has advanced our understanding of fundamental aspects of the city including the social, economic, political, and religious systems that made Teotihuacan a major player in Classic Mesoamerica. Today, the monumental landscape of the archaeological park continues to awe tourists by the millions, as it continues to be at the center of Mexican identity and pride. Therefore, it is important for archaeologists to engage with the public about their findings concerning what living at Teotihuacan was like and what factors may have caused their abandonment.

Unlike the Maya and other cultures with deciphered writing systems, archaeological explorations in Teotihuacan are one of the only methods for reconstructing the past. At this point, it is unknown whether Teotihuacan’s pictographic writing system will help us to decipher who they were and what they did. Teotihuacan’s contemporaries to the south, the Maya, for example, developed a hieroglyphic writing system which allows archaeologists and other specialists to read detailed insights recorded by ancient scribes concerning dynastic lineages, important historical events, and even timing and meaning of religious rites.

Unfortunately, the archaeological record at Teotihuacan is not pristine; multiple contemporary excavations revealed numerous looting activities, some even large scale, in both ancient and modern periods. Even after the collapse of the Teotihuacan state, other groups including the Aztecs inhabited areas encircling the ceremonial center, and these settlements continued to be occupied well into the Colonial and even modern periods. Today, people still remember when family members used to go to the ceremonial center of Teotihuacan to plow their fields. During this continued occupation, some of the ruins were pillaged for construction materials, structures were flattened to construct agricultural fields, and many mounds were looted to recover artifacts.

So how does looting affect the archaeologist? Well, the looting of materials makes the job of the archaeologist much more difficult. Not only are the materials but also their context lost. Why were they deposited there? What is the significance of these objects? What were they used for? These are but a few of the questions that archaeologists seek to answer that require information concerning the object’s provenience. Therefore, it is a primary motive of our project to raise awareness for the need to protect and care for archaeological sites in order to preserve our heritage by telling the story of past ancestors through their material culture.